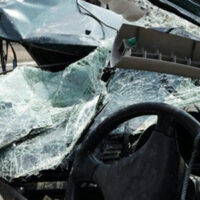 In the first wreck, Ralph Innamorato was waiting to enter a gas station on Seven Springs Boulevard. He pulled directly into the path of an oncoming motorcycle, ridden by Bradley Casler and Alia Rodger. They were subsequently declared dead at a local hospital, and charges are pending against Innamorato.

Several hours later, Xavier Brown, who was speeding northbound on U.S. Highway 19, smacked into the rear of a dump truck, driven by Brandon Dalinda. Brown sustained fatal injuries at the scene of the wreck.

Left-turn motorcycle crashes like the one described above constitute about a third of the fatal motorcycle wrecks in Hillsborough County. Some riders employ safety tricks, like wearing brightly-colored clothes or helmets, to improve their visibility. But there is little or no evidence that these tricks are effective. So, the best thing for riders to do is to assume that motorists do not see them, because in many cases, that’s probably true.

These crashes could also involve the last clear chance doctrine, which is discussed below.

Speed is one of the leading factors in motor vehicle crash fatalities. Excessive velocity is even more important in vehicle-on-pedestrian claims. If the tortfeasor was travelling slower than 20mph, the pedestrian fatality rate is about 10 percent. The fatality rate catapults to 90 percent at impact speeds of 40mph or greater.

If the victim was not in a marked crosswalk, which is usually the case, insurance company lawyers often bring up the sudden emergency defense. This defense excuses liability if the tortfeasor:

Most people react reasonably to crashes. They pull over to the side of the road and wait for emergency responders to arrive.

However, the “sudden emergency” prong is different. These words are in quotation marks because not everything constitutes a sudden emergency. This label applies to things like lightning strikes, violent wind gusts, hood fly-ups, and other completely unexpected situations. This label does not apply to jaywalking pedestrians, large potholes, stalled vehicles, and other everyday hazards.

Sometimes, the tortfeasor is not the only party responsible for damages. In most crashes involving dump trucks, Uber drivers, taxis, and other commercial vehicles, the respondeat superior rule applies. Employers are liable for the negligent acts their employees commit during the scope of employment. So, in the third crash described above, the dump truck owner, and not Dalinda, might be responsible for damages.

But wait. Didn’t the other driver rear-end the dump truck? Yes, and that’s where the last clear chance rule may come into effect. If Dalinda had a chance to avoid the crash, perhaps by changing lanes, and did not take advantage of that chance, he is legally responsible for the wreck.

Vicarious liability theories like respondeat superior are particularly important in catastrophic injury claims. Many times, individual tortfeasors do not have enough insurance coverage to provide fair compensation in these situations.

Vehicle collisions often cause serious injuries. For a free consultation with an experienced car accident injury attorney in Tampa, contact The Matassini Law Firm. Home and hospital visits are available.