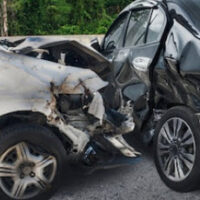 Four people are in custody after authorities say they stole a vehicle and collided with another vehicle during their getaway.

The incident began with an alleged carjacking on 18th Avenue in St. Petersburg. Police were alerted but they did not pursue the suspects. The stolen Hyundai sped away from the scene and collided with a PT cruiser in the 18th Avenue/25th Street intersection. Both PT cruiser occupants were seriously injured and rushed to nearby hospitals. The four suspects fled the scene, but officers apprehended them a short time later.

Three of the four suspects were also injured.

Excessive velocity is a factor in about a third of the fatal car crashes in Tampa, largely because speed affects both the risk of a collision and the force in that collision.

Velocity multiples stopping distance. In the time required for drivers to see hazards ahead, like stalled cars, move their feet from the accelerator to the brake, apply the brake, and stop the car, vehicles keep moving forward. At 30mph, most vehicles travel about six car lengths during these moments. At 60mph, stopping distance triples to eighteen car lengths.

Other factors, such as vehicle weight and road conditions, may increase stopping distance even further.

Speed also multiplies the force in a collision, according to Newton’s Second Law of Motion. The effect is not just incremental. It’s exponential. A minor “fender-bender” at a slow speed is a serious injury collision at a higher speed.

If the tortfeasor (negligent driver) flees the scene, many victims think they cannot obtain compensation for their injuries. But that’s usually not the case.

Even if the tortfeasor is not identified, hit-and-run victims can still obtain compensation. In most cases, these individuals may file claims against their own insurance companies. Typically, these claims settle quickly and on victim-friendly terms.

Normally, a car wreck is not a “known” risk. It’s only a theoretical risk. The result is only different if the passenger sees the tortfeasor driving erratically before the crash and that erratic driving caused the subsequent wreck.

Florida is a pure comparative fault state. Even if the victim was 99 percent responsible for the crash, the tortfeasor is still responsible for a proportional share of damages.