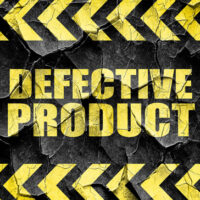 Most people assume that the cars they drive, the medicine they take, and the other products they use every day are perfectly safe. In many cases, that assumption is correct. But in many other cases, the truth is much different. Dangerous products seriously injure thousands of victims in Tampa every year.

In general, manufacturers are strictly liable for damages in these cases. Their responsibility is absolute. It does not matter how careful, or how careless, the company was at any point during the design and manufacturing process. So, to obtain compensation, victim/plaintiffs need only prove causation. Typically, that process involves one of the three scenarios discussed below.

In the early 1970s, Ford faced stiff competition from incoming small and fuel-efficient Japanese imports, like Hondas and Mazdas. So, then-Chairman Lee Iacocca directed his engineers to design a car that, in his words, didn’t cost a dime over $4,000 and didn’t weigh an ounce over 4,000 pounds.

Engineers came up with the Ford Pinto. To conserve weight, these cars had their rear gas tanks outside the rear axle. Furthermore, the tanks were relatively exposed. Almost immediately, an unusually high number of deaths and serious injuries occurred in relatively low-speed collisions. The unprotected and poorly-paced gas tanks were prone to rupture and explosion in these cases.

Pintos had defective designs. Engineers should have protected the gas tanks better. The Pinto was a defective product while it was still on the drawing board.

Vehicle airbags are basically the opposite of unsafe designs. These gadgets have saved countless lives in vehicle collisions since their introduction in the 1990s. As technology has advanced, airbags have become even more sophisticated and more protective.

But not all airbags operate flawlessly, and the Takata airbags are a good example. These well-designed airbags contained cheap materials. Specifically, the company used a cheap chemical propellant that’s prone to over-inflation and sudden explosion. As a result, drivers are showered with dangerous shrapnel even in relatively low-speed collisions. Faced with a rising tide of liability lawsuits, the company eventually declared bankruptcy.

But the Takata airbag story is by no means over. As many as 42 million U.S. cars may have defective airbags, and government regulators have only recalled a fraction of them. As recently as September 2018, Honda recalled an additional one million vehicles with defective airbags.

Almost immediately, however, reports began to surface of dangerous heart complications which accompanied fen-phen use. The combination of these two safe drugs was dangerous, yet Wyeth did little or nothing to warn people of a known danger. Fen-phen claims turned into one of the largest class-action lawsuits in history, with over $19 billion in claims.