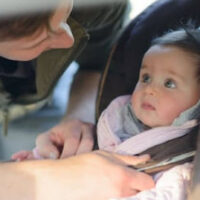 Even though she was safely secured in a carseat, tiny Clara Garcia was not among the survivors of a serious crash in Hillsborough County.

According to investigators, a driver on Van Dyke Road ignored a stop sign and t-boned an SUV which had the right-of-way in the intersection. Six other vehicles slammed into the wreckage in the busy intersection. That SUV contained baby Clara and her parents, Hunter and Kayla Garcia. All three were transported to local hospitals, along with several other victims. Clara was the only one who did not survive.

Deputies said that Clara was in a carseat at the time of the crash.

It is always important for a Tampa personal injury attorney to review an injury case. It does not matter which driver got a ticket or which driver appeared to have been at fault. The above case is a good example, because fault is so uncertain.

Intersection collisions often involve the last clear chance doctrine. That’s especially true for stoplight and stopsign-related crashes. Assume Jose is waiting to make a left turn against traffic. As soon as the green arrow appears, he makes his turn. Wanda, who is approaching Jose on the other side of the median, does not notice that the light has changed. She then t-bones Jose.

On the surface, it appears that Wanda is clearly at fault. She ran a red light and broadsided another vehicle. However, if Jose had a reasonable chance to avoid the crash, perhaps by waiting for Wanda to pass, he has a legal duty to do so. If he does not, he is responsible for all damages.

Causation may be an issue as well, especially in pile-up crashes. In these situations, it is difficult to tell, with any certainty, which driver “caused” a particular injury.

Fortunately, the burden of proof is only a preponderance of the evidence (more likely than not). So, if there is any substantial evidence that a driver may have caused an injury, that proof is usually sufficient. The non-victim may be able to file a cross-claim against another driver, but these matters are extremely complex.

The above case also illustrates the nature of car crash injuries. Even though baby Clara was secure in her carseat, she did not survive. Child victims are especially vulnerable in vehicle collisions, as are elderly people and individuals with pre-existing medical conditions.

According to the eggshell skull rule, all these victims are entitled to full compensation. It does not matter if they were particularly vulnerable to injury.

Damages in a Wrongful Death Claim

In many ways, wrongful death claims are different from injury claims, especially if the victim was a small child.

Wrongful death laws usually vary slightly by state. In Florida, only the decedent’s personal representative may file a claim. The family members may be entitled to compensation, but survivors cannot file legal paperwork of their own.

Damages are rather complex as well. Different victims are entitled to different forms of compensation, as follows:

Lost future income is rather difficult to calculate, especially if the decedent was a child. Many Tampa personal injury attorneys partner with accounting professionals to present accurate estimates to the jury.

To recover damages for their own grief and suffering, survivors must generally file separate claims, using a theory like negligent infliction of emotional distress. However, if the decedent was a child, the parents may be able to obtain such compensation in the wrongful death suit itself.

Intersection collisions often cause serious or fatal injuries. For a free consultation with an experienced Tampa car accident attorney, contact The Matassini Law Firm, P.A. Attorneys can connect victims with doctors, even if they have no money or insurance.