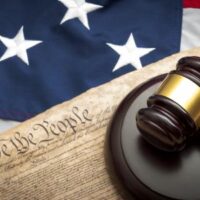 The federal government is charging Douglass Mackey with election tampering, fraud, and other charges after he encouraged voters to text their votes to a phone number instead of showing up in person. Mackey told his followers that if they texted something to a specific number, it would save them the effort of voting in person on election day. Mackey was hoping to suppress support for Hilary Clinton.

The 31-year-old Mackey was identified as having a higher influencer rating than NBC News and other major media outlets. The feds accuse Mackey of spreading tactical falsehoods to influence the outcome of an election. Mackey is believed to have targeted Black voters specifically.

The feds are calling this “vote theft” and “fraud”. But is it?

Back in the days of Jim Crow, voter suppression targeted the African-American community, but not by trickery, but intimidation. Poll taxes and other quasi-legal methods to prevent Blacks from voting were employed across the U.S. It is now Unconstitutional to use poll taxes or unfairly distribute voting rights based on protected characteristics such as race. It is highly unusual for an individual citizen to be charged under this statute. It is much more likely for these charges to be levied against municipal governments or “state actors” (such as company towns).

The government will claim that he tricked at least 5,000 voters into sending their votes to a random number and making them believe that they had already voted. The government will attempt to claim that this is a form of fraud, that Mackey made knowingly false statements to suppress Democratic turnout and targeted black voters in the process.

We just don’t have any examples of this type of scheme committed against Americans by Americans. However, it is important to note that Russia developed a social media disruption playbook, and creating confusion and undermining the democratic process was certainly in the mix.

This is the federal government testing the waters. If the feds can’t get a conviction based on existing law, then you will likely see a push to draft a law that prevents this type of manipulation. Then, a determination will need to be made as to whether or not that law is legal.

If you’re being charged with social media manipulation in the wake of prosecutorial fervor to curb such influence, call our Tampa criminal lawyers today. The Matassini Law Firm has a broad range of experience in federal court. We can help.