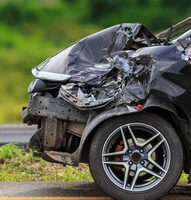 A Florida man is in custody after he jumped into a river to avoid capture in the wake of a car crash.

Police say that 43-year-old Jack Knapper rear-ended another vehicle which was stopped at a traffic light. Officers tried to detain Knapper, who immediately fled the scene. A short distance away, he leaped from his car, ran into a wooded area, and swam into the Hillsborough River in an attempt to evade pursuing officers. A sheriff’s deputy and a Florida Highway Patrol officer swam in after Knapper and took him into custody.

Statistics vary greatly by jurisdiction, but in general, about half of all hit-and-run drivers are captured and successfully prosecuted in criminal court. The proportion is probably higher in civil court, for the reasons outlined below.

Unless the tortfeasor (negligent driver) voluntarily surrenders or, as in the above story, is captured near the scene, there is a good chance authorities will not make an arrest. Emergency responders and investigators often have almost no evidence to go on.

So, in hit-and-run cases, evidence collection is often a Tampa personal injury attorney’s first priority. This additional evidence usually comes from sources that police officers overlook, such as:

To expedite the evidence collection process, many Tampa personal injury attorneys partner with private investigators or other such professionals.

In criminal court, prosecutors must establish guilt beyond a reasonable doubt. So, without solid evidence which places the defendant behind the wheel at or near the scene of the collision, it’s almost impossible to obtain a conviction.

But in civil court, victim/plaintiffs must only establish negligence, or a lack of care, by a preponderance of the evidence, or more likely than not. That’s a much lower burden of proof.

Assume that footage from a camera a few blocks from the accident site reveals a partial license plate number. An attorney can use that scrap of information to find the car. And, since it is more likely than not that the owner of a car drives it at a particular time, a jury would probably order the owner to pay damages. That’s especially true if the owner did not have an ironclad alibi.

Even if an attorney cannot locate the tortfeasor or owner, victims still have legal options in these situations. For example, victims with uninsured/underinsured motorist’s coverage can usually file claims against their own insurance companies.

Even if the tortfeasor remains at large, hit-and-run victims have legal options. For a free consultation with an experienced Tampa car accident attorney, contact The Matassini Law Firm, P.A. Home and hospital visits are available.