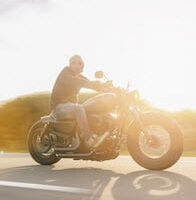 Unlike vehicle occupants, motorcycle riders have no restraint systems or steel cages to protect them during car crashes. So, motorcycle riders are about thirty times more likely to die in vehicle collisions. Even if they survive, their injuries are often much worse, typically because the force of the impact usually throws riders off their bikes.

Since the stakes are so high, insurance company lawyers often pull out all the stops as they try to defend these claims. Some of the legal defenses are not found in any law books and come straight from the most recent insurance defense seminar. Only an experienced Tampa motorcycle crash attorney knows how to prepare for, and respond to, these defenses.

Many victims think that if they were not wearing a helmet, they cannot file a claim for compensation. The law in this area is very unsettled. However, it’s very clear that this belief is wrong.

Here’s the problem. In Florida, most riders over 21 do not have to wear motorcycle helmets. However, all drivers must wear seat belts. And, Florida courts have embraced the so-called seat belt defense. Unbelted drivers may be responsible for their own injuries in the Sunshine State.

The lack of a law is probably controlling. If the legislature does not require riders to wear helmets, a judge certainly does not have the power to make such a mandate.

Additionally, motorcycle helmet use is irrelevant from a purely legal perspective. A helmet, or lack thereof, has nothing to do with the cause of the crash, which is the essence of a legal claim. In fact, one could argue that many helmets increase the risk of a crash, since they decrease hearing and peripheral vision.

The same thing is true from an injury perspective. Motorcycle riders have no duty to mitigate (voluntarily reduce) their damages before the crash. Otherwise, they would not just have to wear helmets. Given the aforementioned lack of protection, they would practically have to wear suits of armor.

Even if a judge does allow the motorcycle helmet defense, the insurance company must do more than introduce safety statistics. A doctor must testify that a helmet would have reduced the victim/plaintiff’s injuries by X percent.

Many people believe that motorcycle riders are reckless thugs who drive carelessly. This attitude is not as pervasive today as it was before, but it is still present. Motorcycle riding is not in the same legal category as race, gender, national origin, and other statuses. So, many Hillsborough County judges give insurance company lawyers more leeway in this area. They would not allow arguments tinted with racial prejudice, but they may not come down as hard on motorcycle prejudice arguments.

So, an attorney must be both proactive and diligent. It’s important to emphasize all the good things the victim did, such as obey the speed limit. Therefore, even if the jury is prejudiced, the rider becomes an exception to the reckless thug rule. It’s also important to object to improper arguments and preserve the integrity of the system.

Motorcycle crash victims may be entitled to significant compensation. For a free consultation with an experienced personal injury attorney in Tampa, contact The Matassini Law Firm, P.A. We do not charge upfront legal fees in these cases.