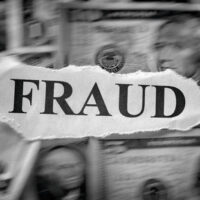 Any deceitfulness for financial gain is considered fraud. But the following types of fraud are usually considered worse than some other similar criminal acts.

Under both federal and Florida law, the following types of fraud are especially serious. Typically, these fraud scams involve a large amount of money, a significant amount of dishonesty, or both.

These kinds of fraud have some common elements as well. They all involve a material misstatement of a current fact. Other false statements may be dishonest and possibly illegal, but they are not fraudulent.

There is a difference between an honest mistake, or even a dishonest mistake, and tax fraud. Generally, if the error amounts to more than about 15 percent of the tax owed, the IRS or state revenue agency may consider the error to be fraudulent. The same thing applies if the taxpayer omits an entire income stream.

Additionally, not all tax fraud matters involve criminal prosecution. The IRS normally deals with such matters through audits and other civil action.

As for transactional fraud, such as moving money to a different account or “selling” an asset for a ridiculously low price, a 90-day fraud presumption usually applies. If the transaction occurred within three months of filing, fraud matters are harder to win.

Quite often, these cases are incredibly complex. The pretrial investigations normally last months. As such, these prosecutions have lots of moving parts. Nevertheless, as in other fraud cases, a relatively early plea bargain is sometimes in everyone’s best interests, especially if the defendant has other secrets that prosecutors should not find out about.

This kind of fraud often goes further than the insurance company and the fraudster. Indirectly, all policyholders pay for insurance fraud. So, once again, prosecutors are normally very aggressive in this area.

Insurance fraud is quite common in Florida. The Sunshine State has a no-fault insurance law. In the past, insurance adjusters often paid small claims without asking too many questions. But that is no longer the case, and as a result, some people who previously got away with insurance fraud now get caught.

Frequently, identity theft involves not only dishonesty, but also a breach of trust. Additionally, for victims, identity theft is one of the most unsettling types of crime. This type of offense ranges from relatively small dollar amounts to huge scams. But regardless of the amount, the underlying issues remain the same.

Any type of fraud is a very serious matter. For a free consultation with an experienced Tampa fraud attorney, contact The Matassini Law Firm, P.A. Home and jail visits are available. Nicholas G. Matassini is Board Certified in Criminal Trial Law by the Florida Bar and is AV Rated by Martindale-Hubbell.