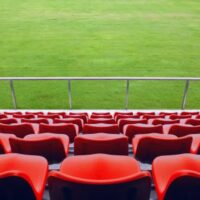 As soon as the Washington Football Team announced that they were going to change their name, I clamored for them to call themselves the Hogs after their offensive line that shut down the Buffalo Bills in Super Bowl 26. No one listened, and of course, now they have a generic, boring team name that couldn’t possibly offend anyone by virtue of being too generic. They are also facing a lawsuit after a railing collapsed injuring four fans during a post-game event. The fans were allowed to watch players enter the locker room after being escorted by stadium personnel. The railing collapsed as fans reached out to players and at least four people were injured. They have since filed a lawsuit against the Washington Commanders and the stadium.

So, basically, the stadium personnel has been faulted for 1) not anticipating that the railing would fall when multiple fans were pressed up against it 2) not rendering aid after the fans were injured 3) not taking a report of the incident after it occurred. The NFL requires all stadiums to abide by a minimum set of standards relating to fan safety. In this case, at least three violations resulted in injury to fans. The fans were then advised to “get the f*ck out of the stadium”. You have to love the east coast. The fans almost struck Jalen Hurts as he was coming through the tunnel after a post-game interview.

The fans were escorted to the rail by stadium personnel so that they could watch the players enter the locker room. They leaned on the rail, as you might expect from a fan, but the rail gave way causing fans to rain down where the players were entering the locker room. They landed on concrete causing broken bones, contusions, and other injuries that required immediate medical attention. Instead of rendering aid to the fans, stadium personnel advised them to leave with haste in a vulgar manner in violation of NFL rules on managing injured fans.

It is thus likely that the fans will win their injury lawsuit against the stadium if the stadium doesn’t move to settle the matter quickly with a non-disclosure agreement. The latter is more likely in a case like this, since the stadium exposed the fans to a danger and the defendant will not want a jury guessing on how much money the injured parties should receive after being told to “f*ck off”. So, a good settlement is likely here for the victims because they have considerable leverage and the law is on their side.

Have you fallen on top of a football player? You may be eligible to receive compensation. Call the Tampa personal injury lawyers at The Matassini Law Firm today to schedule a free consultation and learn more about how we can help.