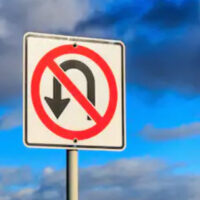 Few details were available about a fatal wreck which occurred near the intersection of U.S. Highway 41 and Sunset Lane.

According to police and witnesses, 46-year-old Debra Beltramea, who was southbound on 41, attempted to make a U-turn onto the northbound side. In so doing, she collided with another northbound motorist, whose name was not released. The force of the collision caused both vehicles to spin out of control and eventually come to rest on the northbound side.

Most vehicle collisions involve the negligence per se (negligence “as such”) doctrine. Typically, drivers cannot travel more than a few blocks without violating at least one safety law. If that violation substantially causes injury, the tortfeasor (negligent driver) is presumptively negligent.

In Florida, the presumption of negligence becomes negligence as a matter of law if the tortfeasor violated a penal safety law, such as the DUI or reckless driving law. In these situations, victims need only prove cause.

This doctrine shifts blame for the crash from the tortfeasor to the victim. For example, in the above story, the victim’s U-turn might have been illegal, but the tortfeasor clearly was not maintaining a proper lookout.

In these situations, jurors must divide fault on a percentage basis between the victim and tortfeasor. Florida is a pure comparative fault state. So, even if the victim was 99 percent responsible for the wreck, the tortfeasor is still responsible for a proportionate share of damages.

If the victim dies, the case is more difficult for a Tampa personal injury attorney to successfully resolve, both from an evidentiary and procedural standpoint. However, these added difficulties should never stand in the way of fair compensation.

The police accident report is usually a key piece of evidence in a car crash claim. If the victim did not survive, the police report obviously contains only one side of the story. So, an attorney might need additional evidence to establish liability.

Damages are different as well. Generally, wrongful death claimants are only entitled to pecuniary losses, such as:

The survivors usually cannot obtain compensation for their own grief and suffering, unless the decedent was a blood or adopted child. Compensation might be available, under a separate theory like negligent infliction of emotional distress.

Car crashes often cause serious injuries. For a free consultation with an experienced Tampa personal injury attorney, contact the Matassini Law Firm, P.A. Attorneys can connect victims with doctors, even if they have no money or insurance.