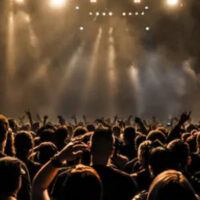 You may recognize the name Live Nation as one of the named defendants in the Travis Scott concert where ten people lost their lives after concertgoers rushed the state, trampling one another. Now, Live Nation is facing another lawsuit related to the murder of a rap star who was set to perform later in the evening.

According to the lawsuit, Drakeo the Ruler was stabbed several times backstage by a mob of 40 to 60 people who rushed the backstage barricades and stabbed the rapper several times. He died later at the hospital. The festival took place in LA.

Attorneys for the family characterize the attack as a “targeted assassination” and a “lynching”. Video surveillance shows men dressed in red rushing the barricade to get to the rapper. There were no security guards or police officers in the fenced-off area. The family is faulting negligent security for the rapper’s death and has filed a wrongful death lawsuit against Live Nation.

Police are investigating the killing, but no arrests have been made.

Is a proprietor or promoter responsible for a murder?

Americans have very individualist notions of responsibility and agency that often make the job of personal injury attorneys a little more difficult. In a case like this, I bet you’re wondering why the men who killed the rap star aren’t responsible for his death. Well, they are. But under the law, just because one person is responsible for something, it doesn’t mean that other parties aren’t also responsible.

In this case, a proprietor, promoter, or anyone else who stages a public event is responsible for ensuring the safety of their guests. That includes security. Lawsuits such as these are filed under a theory of negligent security. In order to prove that a proprietor owed a duty of care, you must prove that they should have afforded more security to the event than they did. In this case, it remains unclear what, if any security was available to the artists who were performing that night.

Celebrities are often targeted for these types of assassinations because it’s a quick way to gain notoriety. So, having adequate security backstage to protect your celebrity artists is of paramount importance to event organizers and promoters. Why this lapse occurred here is unknown.

The concert promoters can always argue that a mob of 40 to 60 people would have overwhelmed even the best security they could afford to provide. Nonetheless, the rapper was immediately accessible to those targeting him. The promoters will also blame the rap star for whatever ongoing beef resulted in the targeted assassination.

Talk to a Personal Injury Attorney in Tampa

Lawsuits claiming negligent security that results in injury are compensable under Florida law. Call the Tampa personal injury lawyers at the Matassini Law Firm today to schedule a free consultation and learn more about how we can help.