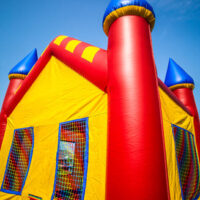 Determining who is at fault in a bounce house injury claim can be a complex process and often requires expert legal advice. As many parents may suspect thousands of kids are severely injured each year while playing in bounce houses and other inflatable play areas. We are reminded of this sad fact at Matassini Law weekly when reading the news. Alas, tragedy has struck again. This time in Australia.

Tragedy at an Australian School this Week

This Thursday was the last day of the school year for most children in the Australian island state of Tasmania. A primary school in the small city of Devonport wanted to celebrate with dancing, games and, out on the big field behind the building, a bouncy castle and giant inflatable Zorb balls.

By 10 a.m., a tragedy was unfolding because of a freak accident on the school field.

While some schoolchildren were on the inflatable bouncy castle, the police said, “a significant” gust of wind sent it and the Zorb balls flying into the air. Nine students plunged more than thirty feet to the ground.

The police confirmed the first death at midday, the second by 1:45 p.m. and the third and fourth by late afternoon. By the early evening, five sixth graders at the school, Hillcrest Primary, were dead.

Ambulances and helicopters rushed to the scene. Some children were treated there, while others were taken to a hospital.

Bounce House Injuries on the Rise

Bounce houses, also known as moon bounces, are not only found at birthday parties. Such play areas are also a common attraction at fairs, festivals, carnivals, amusement parks, and other events.

Statistics show that bounce houses are the most dangerous inflatable attraction. According to the Child Injury Prevention Alliance, the number of injuries associated with inflatable bouncy houses has soared over the last 20 years to more than 30 children injured every day. Bounce house related injuries account for nearly 4,000 emergency room visits a year in the United States. Although the injuries sustained can vary, the most frequently reported injuries include:

According to emergency room data, the Consumer Product Safety Commission reported more than 18,800 injuries in 2012 as a result of moon bounces, bounce houses and inflatable amusements. That is a threefold increase from six years earlier, according to the commission’s National Electronic Injury Surveillance System. In 2013, that number dipped slightly. It is unclear, according to the report, whether the increase is due to increased exposure or a rise in the injury rate.

Unfortunately, this week’s tragedy in Australia was one of the deadliest bouncy castle episodes in recent years.

In 2019, two children were killed and 20 others injured after a dust devil swept a bouncy castle high into the air in Henan Province in China. One child was killed in Britain after being thrown from one in 2018. Two fairground workers were sentenced to three years in jail after they were convicted of manslaughter by gross negligence after a bouncy castle blew away in 2016, killing a 7-year-old girl in Essex, England.

In 2014, two upstate New York boys, 5 and 6, were thrown from an inflatable bounce house that went airborne, sailed about 50 feet high and dropped one child in the street and another in the parking lot of an apartment building, where he hit his head on a car. A 10-year-old girl in the inflatable got minor injuries. But one boy suffered a serious head injury and was placed in a medically induced coma. The other was left with broken arms, a broken jaw and other injuries, local reports said.

If you or a loved one has sustained injuries from a bounce house amusement call Matassini Law today or visit us matassinilaw.com for a free consultation. A delay in seeking legal help could jeopardize your case. We’ve been fighting for injured families in the Tampa Bay area since 1976.