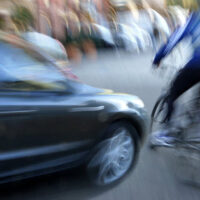 An 84-year-old woman apparently plowed into a bicycle rider who was crossing the street in the crosswalk, but did not have the green light.

Few other details were available about the wreck, which occurred at the intersection of Laurel Road and U.S. Highway 41. Investigators closed the area to traffic for several hours while they tried to determine a cause. They speculate that speed might have been a factor in the collision.

Bicyclists represent only a tiny portion of the travelers on Hillsborough County roads, yet they make up a much larger portion of roadway fatalities. For the most part, bicyclists have no protection from oncoming cars. Helmets and pads offer excellent protection from accidental falls, but they are almost useless in high-speed collisions.

That’s because speed multiplies the force in a collision between two objects. If the tortfeasor (negligent driver) is moving slower than 20mph, the bicyclist fatality rate is less than 10 percent. At 40mph, the death rate increases almost tenfold, to over 90 percent.

Unfortunately for riders, most of these accidents are high-speed collisions. Generally, the bicyclist is on the open road as opposed to inside an intersection crosswalk. So, the tortfeasor is usually moving at or near top speed at the moment of impact.

Florida has some limited bicyclist safety laws. But they only go so far. There are very few designated bicycle lanes in Tampa which include concrete dividers or other such barriers. Precautions like these are the only effective way to reduce the number of bicycle/vehicle collisions.

Because of the serious injuries these victims sustain, a Tampa personal injury attorney can normally obtain substantial compensation. This money usually includes compensation for economic losses, such as medical bills, and noneconomic losses, such as pain and suffering. Additional punitive damages might be available as well, in some extreme cases.

In court documents, insurance company lawyers often state that pedestrians “darted out into traffic” or bicyclists “failed to remain in a designated bike lane.” Arguments like these typically set up the sudden emergency defense. This legal doctrine excuses negligent conduct, like running over a bicyclist, if the tortfeasor:

This first prong is usually present. After a collision, most tortfeasors react reasonably. They pull to the side of the road, wait for emergency responders to arrive, and assist victims if possible.

The second prong, however, is different. Generally, a “sudden emergency” is a lightning strike, sudden strong wind gust, or another completely unanticipated situation. A jaywalking cyclist or pedestrian is more like a large pothole or a stalled car. Motorists should anticipate such emergencies and be ready to deal with them.

Therefore, even if the tortfeasor reacted reasonably, the sudden emergency defense normally does not apply in pedestrian and bicycle accidents.

Reach Out to Savvy Lawyers

All accident victims might be entitled to substantial compensation. For a free consultation with an experienced Tampa car accident attorney, contact The Matassini Law Firm. Our firm can assist car crash victims with obtaining necessary medical care, even if they have no insurance.