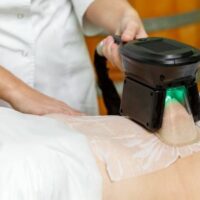 For almost a decade, CoolSculpting (cryolipolysis) has capitalized on modern society’s infatuation with immediate weight loss results by offering a chic, surgery-free option available at most modern MedSpas. Coolsculpting makes attractive claims to potential customers by promising fast, easy slimming results with an average of one hour per session, no recovery time at home, and a guaranteed fat reduction of 20-25% after the first session alone. For many it’s too tempting pass up.

Not all procedures go smoothly though as the tally of 60,000 diagnosed cases of paradoxical adipose hyperplasia (PAH) reveals. Aggrieved CoolSculpting clients have now filed lawsuits across the nation claiming, among other things, that this fat-cell shrinking procedure is directly related to the growth of more fatty cells, hardening the skin of the treated area.

Last week, Linda Evangelista, the ’90s-era Supermodel, shared on Instagram that she had been disfigured by a fat-reducing procedure called CoolSculpting that did the opposite of what it promised: Instead of reducing the amount of fat she had, CoolSculpting increased it, she said.

After treatment, Evangelista said, she developed a condition known as paradoxical adipose hyperplasia, or PAH, in which the tissue in the treated area grows larger and hardens and stays that way. PAH is sometimes referred to as the “stick of butter effect,” because it can look like a stick of butter hidden under the skin; the enlarged tissue matches the long, thin shape of the CoolSculpting applicator.

“PAH has not only destroyed my livelihood, it has sent me into a cycle of deep depression, profound sadness, and the lowest depths of self-loathing,” Evangelista wrote. She filed a lawsuit last week against Zeltiq Aesthetics Inc., the subsidiary of Allergan that markets and licenses CoolSculpting devices, claiming that the company had “intentionally concealed” the risks and had “failed to adequately warn” consumers, including Evangelista, about them.

CoolSculpting is an outpatient treatment, approved by the Food and Drug Administration, that is designed to kill fat cells near the surface of the skin by cooling them in a process known as cryolipolysis. Scientists first proposed the idea behind the technique in 2008, based in part on the existence of a rare phenomenon that afflicts kids, called Popsicle panniculitis. When some young children suck on Popsicles, their cheeks develop permanent divots because the cold damages nearby fat cells. Similarly, doctors had noticed in 1980 that when women go horseback riding in the cold, they sometimes lose fat around their thighs.

Medical spa doctors and physicians isolate one area of the body that presents stubborn belly fat and use the CoolSculpting equipment to breech the surface-level skin and freeze the targeted fat cells. Those frozen cells shrink, die, then filter through the liver and out of the body.

Most potential side effects are minimal, from common redness, tenderness, stinging and tingling to muscle cramping, itchiness, and possible diarrhea. However, more rare but serious side effects include increased pain for a full month, reduced movement/response of the tongue, weakened lower lip muscle, dizziness, sweating, nausea, and now, potential PAH, which might also be related to skin burns, blood clots, nerve damage, and even hernias.

Paradoxical Adipose Hyperplasia (PAH) nearly reverses the CoolSculpting procedure. Rather than shrinking, freezing, and destroying the unwanted fat cells, PAH is the increase of those fat cells. The frozen fat cells grow even larger and produce a hard skin surface of the localized area. Often, this result is known as the “stick of butter” effect, as the skin tends to not only harden but take the shape of the rectangular CoolSculpting machinery.

While PAH poses little risk of death, there are few options for combatting the toughened, swollen area. Most often, liposuction provides positive results, but these results come with a hefty financial burden.

When to see a doctor?

PAH’s full effects are typically seen anywhere from one to six months following a patient’s first CoolSculpting procedure. These side effects are difficult to ignore, as the skin bulges over time and creates a replicated shape of the CoolSculpting machine.

If you have notice toughened, swelling, rectangular-shaped skin, document your condition and visit a qualified doctor immediately.

Since 1976 The Matassini Law Firm has been fighting for compensation for clients wrongfully injured by defective products and harmful cosmetic procedures. Contact us today for a free, confidential consultation about your potential claim.

Visits us www.matassinilaw.com to get your claim started today.