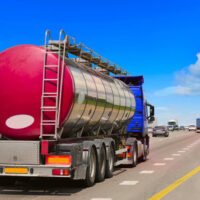 A large tanker truck sideswiped a tiny e-scooter while the scooter rider was apparently driving in the bike lane.

Emergency responders state that 33-year-old John Edgerton was not wearing a helmet as he rode his scooter in the bike lane. Near the intersection of 20th Street and Gordon Street, the scooter collided with a tanker truck that was apparently trying to pass the scooter. First responders state that Edgerton left the bicycle lane and entered a regular traffic lane. He was rushed to a nearby hospital in critical condition.

Lime, the scooter rental company, disputed the official version and insisted that Edgerton was still in the bicycle lane at the time of the crash.

Although emergency responders blamed the scooter rider for this crash, that conclusion is far from certain. Since the rider went to the hospital in critical condition, the police accident report only contained one side of the story. So, no matter what the police report says, if you were hurt in a crash, you should contact a Tampa personal injury lawyer and protect your rights.

In disputed liability matters, it’s important to obtain additional evidence on top of the police report. This evidence may include:

Evidence like this helps build a negligence claim. These claims are easier to establish against commercial drivers. Truck drivers, Uber drivers, and other commercial operators have a higher duty of care in Florida.

The victim/plaintiff must establish negligence by a preponderance of the evidence (more likely than not).

Even if the victim was not wearing a helmet, the victim may still be entitled to substantial compensation. The lack of a helmet means nothing unless the insurance company proves that the victim sustained serious head injuries and a helmet would have substantially reduced or eliminated these injuries. Reading safety statistics to the jury is not enough.