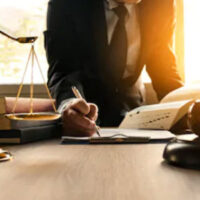 Among the Oath Keepers who are due in court on Friday to face charges of seditious conspiracy for the Jan. 6 riot are two Central Florida men.

Kenneth Harrelson of Titusville and Kelly Meggs of Dunnellon, who were already arrested on charges related to the riot, were among 11 Oath Keepers included in the newly unsealed 48-page indictment.

Jonathon Moseley, attorney for Oath Keepers founder Stewart Rhodes and Meggs said, “Those are very serious charges, but we do believe they have to prove it. And I know from the documents that they have, they knew last May and March that they came to be support services for the demonstration.”

Rhodes, the founder, and leader of the right-wing Oath Keepers militia has been arrested and charged with seditious conspiracy in connection with the Jan. 6 riot at the U.S. Capitol, according to court documents released Thursday.

This marks the first time defendants related to the deadly Jan. 6 insurrection have been charged with seditious conspiracy. Rhodes and Edward Vallejo of Phoenix, Arizona, were arrested Thursday; the remaining defendants were already facing charges related to the Capitol attack.

The indictment accuses Rhodes and the other members of the extremist group with conspiring “to oppose the lawful transfer of presidential power by force, by preventing, hindering, or delaying by force execution of laws governing the transfer of power.”

Authorities said members of the extremist group came to Washington with the intent of stopping the certification of President Joe Biden’s victory in the 2020 election.

As alleged in the indictments, the Oath Keepers are a large but loosely organized collection of individuals, some of whom are associated with militias. Though the Oath Keepers will accept anyone as members, they explicitly focus on recruiting current and former military, law enforcement and first-responder personnel. Members and affiliates of the Oath Keepers were among the individuals and groups who forcibly entered the Capitol on Jan. 6, 2021.

The seditious conspiracy indictment alleges that, following the Nov. 3, 2020, presidential election, Rhodes conspired with his co-defendants and others to oppose by force the execution of the laws governing the transfer of presidential power by Jan. 20, 2021. Beginning in late December 2020, via encrypted and private communications applications, Rhodes and various co-conspirators coordinated and planned to travel to Washington, D.C., on or around Jan. 6, 2021, the date of the certification of the electoral college vote, the indictment alleges. Rhodes and several co-conspirators made plans to bring weapons to the area to support the operation. The co-conspirators then traveled across the country to the Washington, D.C., metropolitan area in early January 2021.

According to the seditious conspiracy indictment, the defendants conspired through a variety of manners and means, including: organizing into teams that were prepared and willing to use force and to transport firearms and ammunition into Washington, D.C.; recruiting members and affiliates to participate in the conspiracy; organizing trainings to teach and learn paramilitary combat tactics; bringing and contributing paramilitary gear, weapons and supplies – including knives, batons, camouflaged combat uniforms, tactical vests with plates, helmets, eye protection and radio equipment – to the Capitol grounds; breaching and attempting to take control of the Capitol grounds and building on Jan. 6, 2021, in an effort to prevent, hinder and delay the certification of the electoral college vote; using force against law enforcement officers while inside the Capitol on Jan. 6, 2021; continuing to plot, after Jan. 6, 2021, to oppose by force the lawful transfer of presidential power, and using websites, social media, text messaging and encrypted messaging applications to communicate with co-conspirators and others.

The charge of seditious conspiracy carries a statutory maximum penalty of 20 years in prison. A federal district court judge will determine any sentence after considering the U.S. Sentencing Guidelines and other statutory factors.

Nicholas G. Matassini is Board Certified in Criminal Trial Law by the Florida Bar and is AV-Rated Preeminent by Martindale-Hubbell. Visit us www.matassinilaw.com. A delay could jeopardize your case.