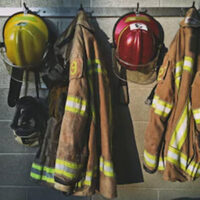 The use of firefighting foams has been linked to an increased risk of developing cancer. Chemicals in these foams—termed “forever chemicals” because they are nearly indestructible—can infiltrate the human body and cause significant health problems, including a variety of cancers. Firefighters, military service members, and industrial and airport workers whose work involved the application of these foams are at heightened risk of exposure to the poisonous “forever chemicals.”

A type of foam used in firefighting called Aqueous Film Forming Foam (AFFF) is known to contain toxic chemicals called per- and polyfluoroalkyl substances (PFAS), which have been linked with cancer. AFFF is designed to extinguish jet fuel- and petroleum-based fires; recent evidence shows it has been used for decades by U.S. military firefighters and civilian firefighters.

Safety advocates across the country are investigating cases on behalf of individuals who were diagnosed with cancer after occupational exposure to chemical-based firefighting foam. As useful as it may be in extinguishing jet fuel and petroleum fires on ships and at airports and military bases, firefighting foam has been linked to an increased risk of cancer due to toxic exposure to the harmful chemicals used to make AFFF. Unfortunately, without proper warnings about the potential for exposure to AFFF to cause cancer, firefighting foam was used for decades by the military, commercial airports and firefighters, and is still being used in some locations. As a result of their long-term exposure to the chemicals in AFFF, firefighters, airport workers, chemical plant workers, military personnel and others who used firefighter foam are now being diagnosed with various types of cancer.

The U.S. Department of Veteran Affairs has begun warning veterans about the potential risk of pancreatic cancer, prostate cancer, testicular cancer, breast cancer and kidney cancer they could face as a result of exposure to chemicals in firefighter foam and those who have already been diagnosed are pursuing legal claims. If you or a loved one is a firefighter, airport worker or U.S. military servicemember and exposure to PFAS caused your cancer, you may be able to seek financial compensation through a firefighting foam lawsuit.

What is Firefighting Foam?

Firefighting foam, or aqueous film-forming foam, is a foam product that has been widely used for decades for the rapid suppression of petroleum and jet fuel fires. The foam works by forming a blanket that smothers the fire, depriving it of the oxygen it needs to burn and thus quickly extinguishing even large fires. AFFF is made using per- and polyfluoroalkyl substances (PFAS) like perfluorooctane acid (PFOA) and perfluorooctanesulfonic acid (PFOS), which are manmade chemical compounds that have been used in commercial products since the 1940s. Because of their ability to quickly suppress petroleum-based fires, the chemicals have been used to make firefighting foam used by firefighters, airport workers and members of the U.S. military for more than half a century, and some are still being used, despite growing concerns about the potential risks the chemicals pose for human health and the environment.

Who can be held responsible?

Big Companies — including 3M and Dupont, among others — have sold AFFF products for decades. According to reports, the foam has been used around the country since at least the early 1970s.

It’s likely that the manufacturers of firefighting foams have been aware for decades that the PFAS chemicals in AFFF could be toxic to humans. Research shows that PFOS chemicals had been detected in the blood of workers at PFAS manufacturing facilities, and the blood of the general population, by the end of the 1970s – a decade later, these chemicals were also found to cause cancer in animals.

How can a Firefighting Foam Lawsuit help?

Filing a product liability claim against the makers of toxic firefighting foam can help cover the cost of:

Do I have to pay a lawyer up-front for representation?

No – and you can still receive first class legal representation. Our family run firm operates on a contingency-fee model. This means we only get paid if we win for you. There are no up-front costs to hire us.

If you or a loved one used firefighting foam and developed cancer, you may be entitled to substantial compensation. Contact The Matassini Law Firm today for your free and confidential case evaluation by completing our contact form at www.matassinilaw.com or by calling us toll free at 1 (888) 377-0011. Let our family help yours during this difficult time in your life.

By The Matassini Law Firm | Posted on April 5, 2021
« Pediatrician Arrested on Charges of Possessing Child Pornography
What is “Tort Reform” and Why Does it Matter? »
Skip footer and go back to main navigation