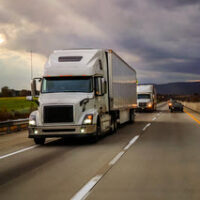 A 63-year-old driver, whose name was not released, lost control of his big rig after a tire tread separation. His hydrogen peroxide load caught fire; the flames engulfed multiple vehicles.

After the tire failure, the truck careened out of control on southbound Interstate 95 near mile marker 162, eventually smashing into the center guardrails. A passenger car was caught in the runaway truck’s path. Two of its occupants — 69-year-old Robert Racicot and 61-year-old Celina Ruel of Quebec — were rushed to a nearby hospital with serious injuries.

The truck driver died at the scene.

One of the first things to understand about this area of the law is that truck drivers and most other commercial operators are common carriers in Florida. Since they have a higher duty of care, it is easier to establish negligence in court.

Duty is only one element of a negligence case. In order to obtain compensation for their injuries, the victims must also establish breach of duty. Breach is a fact question which the jury resolves, and it’s sometimes difficult to draw the line between a driving mistake that almost anyone could meet and a lack of care.

This process is a little easier in commercial truck driver cases, thanks to the Safety Management System. The government continually monitors truck drivers and evaluates them in several different categories, including:

The SMS also records information about alcohol or controlled substance use and the driver’s medical fitness to operate a large truck in Tampa.

In addition to duty and breach, victim/plaintiffs in Florida must also establish causation, which includes both cause-in-fact and foreseeability, as well as the amount of damages. These claimants must establish negligence by a preponderance of the evidence, which means more likely than not.

Large truck collisions usually involve the respondeat superior (“let the master answer”) rule. Employers are liable for the negligent acts of their employees if the tortfeasor (negligent driver) was:

All truck drivers are usually “employees” in negligence cases, even if they were technically owner-operators or temporary agency workers. Furthermore, any act that benefited the employer in any way falls within the course and scope of employment.

Large truck crashes often involve complicated legal issues. For a free consultation with an experienced personal injury attorney in Tampa, contact The Matassini Law Firm, P.A. An attorney can connect victims with doctors, even if they have no money or insurance.