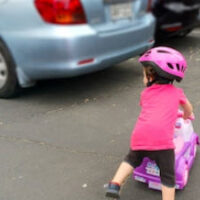 A man who was backing out of his driveway struck a 3-year-old boy who was riding a tricycle. The impact sent the boy to the hospital with serious injuries.

The crash occurred in a residential area of Land O’Lakes. According to police and witnesses, the child was riding his tricycle near his home when the SUV backed out of the driveway and struck him. First responders rushed the boy to a nearby hospital with serious injuries. The driver, who remained at the scene, may face criminal traffic charges.

Excessive velocity is a factor in about a third of the fatal crashes in Florida. Since bicyclists and pedestrians have almost no protection from oncoming cars, speed is especially important in these cases.

When an extremely large vehicle, like an SUV, strikes a small child victim, the victim usually suffers extremely serious injuries, even if the vehicle is not travelling much faster than idle speed. Some of these injuries include:

To obtain these damages, the victim/plaintiff must prove negligence by a preponderance of the evidence (more likely than not). This negligence could be a lack of ordinary care or, as in the above story, the violation of a criminal safety statute.

This compensation may be substantial. So, insurance company lawyers often pull out all the stops in an effort to reduce or deny compensation.

The contributory negligence defense may reduce the amount of compensation the victim/plaintiff receives. If the victim was partially at fault for the crash, the jury may reduce damages accordingly. For example, in an intersection collision case, the victim may not have looked both ways before crossing the street.

Insurance company lawyers often try to claim that a jaywalking pedestrian constitutes a sudden emergency. But that’s normally not the case. Usually, a “sudden emergency” is a completely unexpected situation, like a lightning strike or a hood fly-up.

Pedestrians and bicyclists are highly at risk for serious injury. For a free consultation with an experienced Tampa car accident lawyer, contact The Matassini Law Firm, P.A. Attorneys can connect victims with doctors, even if they have no money or insurance.