Some Slip-And-Fall Basics In Florida 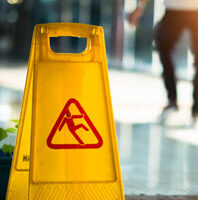 Many of these incidents cause more than bumps and bruises. In fact, falls are the leading cause of emergency room visits in Tampa. They eclipse car crashes, painkiller overdoses, gunshot wounds, and all other kinds of injuries.

Typically, the landowners are responsible for these and other injuries which occur on their property. Making a prima facie (preliminary) case for liability is usually a two-part process. Then, the tortfeasor (negligent actor) has an opportunity to present any relevant defenses.

Like many other jurisdictions, the Sunshine State uses a variation of the common law classification system to determine duty in premises liability cases. This system divides victims into the following categories:

To obtain compensation, both invitees and licensees must prove that the landowner knew about the dangerous condition. Sometimes, there is direct evidence of actual knowledge. That includes things like a written property inspection report or a “cleanup on aisle four” announcement.

Circumstantial evidence of constructive knowledge (should have known) also suffices. Most states, including Florida, use a variation of the time-notice rule. This rule was first articulated in 1911’s Anjou v. Boston Elevated Railway Company. In that case, the victim slipped and fell on a banana peel. Witnesses described the peel as “black, flattened out and gritty.” Since the peel had been on the floor a long time, the court concluded that the owner had constructive knowledge of the defect.

The “Open and Obvious” Defense in Florida

Tampa landowners are not responsible for damages, even if they know about them, if the hazard was open and obvious. This doctrine is very fact-specific. Essentially, both the hazard and the danger must be readily apparent to a reasonable person.

A large display of canned goods in a grocery store aisle is probably an open and obvious hazard. A wet spot on the floor is probably not such a hazard, especially if it was clear liquid.

Landowners are usually responsible for slip-and-fall injuries. For a free consultation with an experienced personal injury attorney in Tampa, contact The Matassini Law Firm, P.A. Home and hospital visits are available.