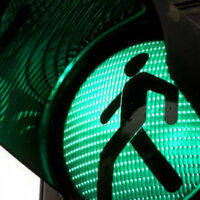 At first blush, fault seems clear when the tortfeasor (negligent driver) is a motorist and the victim is an 11-year-old middle school student who just disembarked from a school bus. But the initial assessment is not always the final word.

According to witnesses and Hillsborough County Sheriff’s deputies, the Mann Middle School student had recently got off a school bus, but the bus had apparently already lifted its stop arm and turned off its red flashers. Brandon Heard Jr. then weaved through stopped traffic on northbound Orient Road near the 29th Street intersection. When Mr. Heard crossed over to the southbound side, where traffic was moving freely, 47-year-old Sabrina Ann Buster was unable to avoid hitting the boy, even though she quickly steered to the right.

Witnesses say that Mr. Heard ran through the stopped vehicles and into oncoming traffic.

Why Pedestrian-Auto Collisions Are Often Fatal

Whereas multiple restraint layers, not to mention a glass, steel, and hard plastic cocoon, protect Tampa vehicle occupants in collisions, pedestrians are completely exposed to danger. So, it is little wonder that impact speed has such a tremendous effect on pedestrian injuries.

Due to the serious nature of these and other injuries, hospital bills in Tampa often eclipse $100,000 in these cases. Compensation is available for these medical bills and other economic losses, along with pain and suffering, emotional distress, and other noneconomic damages.

Insurance company lawyers often raise the sudden emergency defense in Tampa pedestrian-auto collisions, but the defense is often inapplicable. The elements are:

However, in the above-described Tampa collision, the outcome might be different. By steering to the right, the tortfeasor certainly reacted reasonably. And, if the child truly darted out into traffic from between parked cars when there was no stationary school bus in sight, the situation may qualify as a “sudden emergency” under Florida law.

Car crash victims are often entitled to substantial compensation. For a free consultation with an experienced personal injury attorney in Tampa, contact The Matassini Law Firm, P.A. An attorney can secure ongoing medical care for victims, even if they have no insurance or money.

By Matassini Law Firm, P.A. | Posted on December 18, 2017
Skip footer and go back to main navigation