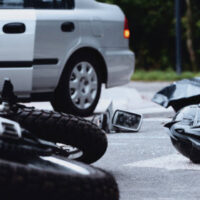 A 24-year-old man is dead after a large SUV demolished his bike at the intersection of Emma Street and Highland Avenue.

According to police and witnesses one man of Valrico, was riding southbound on Highland near Emma. At that moment, another 58-year-old man rolled through a stop sign on Emma in a Ford Expedition and directly into the first man’s path. The motorcycle could not stop and the Valrico crashed into the Expedition’s driver’s side. A witness said that the victim was bleeding profusely from the head even though he was wearing a helmet. He was clinging to life when first responders rushed him to a nearby hospital, and doctors could not save him.

The 58-year-old man was delivering a pizza in his private vehicle.

The combination of low visibility and little protection means that motorcycle riders are over twenty-five times more likely to die in a collision than vehicle occupants.

Cross-traffic motorcycle crashes, like the one in the above story, cause over a third of these fatalities in Tampa. Most people do not maintain a proper lookout for motorcyclists. Furthermore, there are a great number large SUVs and pickups on the road. So, it’s very hard to see motorcycles, especially if the driver is not really looking for them in the first place.

These crashes usually involve sudden acceleration. Typically, when they make left turns against traffic, the drivers try to shoot through small gaps between vehicles.

Lack of rider protection is another reason these crashes are so deadly. Florida vehicle occupants are inside high-impact steel cocoons. Seat belts and airbags provide even more protection. But motorcycle riders are completely exposed to other vehicles. Moreover, the force of the collision almost always throws the rider off the bike. That results in serious injuries like:

In wrongful death and other catastrophic injury crashes, the individual tortfeasor (negligent driver) may not have enough insurance to fully compensate the victim/plaintiff. Fortunately, there are a number of available vicarious liability theories. These legal doctrines create an additional source of recovery.

Respondeat superior (let the master answer) is one of the most common vicarious liability theories. Employers are legally responsible for the negligent acts of their employees if:

Other employer liability theories include negligent hiring and negligent entrustment. These theories usually apply in intentional tort cases, like assaults.

Motorcycle crash victims have several legal options. For a free consultation with an experienced personal injury attorney in Tampa, contact The Matassini Law Firm, P.A. We do not charge upfront legal fees in negligence cases.