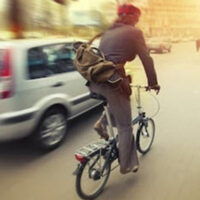 Even though a cyclist is dead, authorities say they have no plans to press criminal charges against anyone.

This wreck happened on the Dale Mabry Highway. According to police, a bicyclist entered a crosswalk against the light. A sedan hit the bicyclist, propelling him into a pickup truck that was travelling in a different direction.

Neither driver was injured.

Victim/plaintiffs must establish negligence, or a lack of ordinary care, by a preponderance of the evidence (more likely than not). In many bicycle crash claims, the necessary evidence is hard to obtain.

Medical evidence is often an issue as well, especially in the wake of a bicycle accident. Many of these victims sustain head injuries. Thin bicycle helmets protect against accidental fall injuries. But they do little good in high-speed collisions.

The brain is very adept at concealing its own injuries. Therefore, many head injury victims “feel fine.” They only feel hurt once more advanced symptoms, like personality changes and severe chronic headaches, appear. By this time, these injuries are much more difficult to treat.

Collecting evidence is not enough. Pieces of evidence are like pieces of a jigsaw puzzle. An attorney must know the right legal theory to use in order to make a compelling picture for the jury.

Negligence per se is a violation of a safety statute. This rule applies if the tortfeasor violates a safety law and that violation substantially causes injury. In these cases, there’s no need to prove a lack of care. Victim/plaintiffs need only prove cause.

Insurance companies have a chance to rebut the victim/plaintiff’s case. In many crosswalk accidents, this rebuttal involves the sudden emergency defense. This legal loophole excuses negligence if the tortfeasor:

Lawyers argue that since the victim/plaintiff “darted out into traffic,” the tortfeasor could not avoid the crash.

Jaywalking bicyclists might be common hazards, but they are certainly not sudden emergencies. This description only applies to things like hood fly-ups and lightning strikes.

Bicycle crashes often cause serious injuries. For a free consultation with an experienced Tampa car accident attorney, contact The Matassini Law Firm. We do not charge upfront legal fees in personal injury cases.

By The Matassini Law Firm | Posted on August 19, 2020
« Guarding Yourself Against PPP Fraud Allegations
FORMER FBI LAWYER PLEADS GUILTY TO FALSYFYING DOCUMENTS »
Skip footer and go back to main navigation