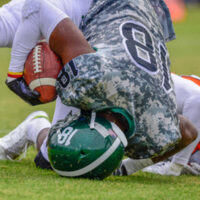 The father of a 16-year-old football player is suing the school district after his son was seriously injured following practice in triple-digit temperatures. The father alleges that the coach of the team failed to call for immediate medical attention after his son collapsed on the field. According to the lawsuit, the boy suffered severe brain and organ damage. The family accuses the coach and the school district of negligence.

The lawsuit states that the player was participating in conditioning drills when he began to feel excessively hot. The player told the coach that he felt weak, but the coach told him to continue running. He tried to run but collapsed on the field.

Instead of calling 911 or otherwise helping the boy, the coach called his father. Emergency personnel never arrived at the scene. Instead, the boy’s father had to transport him to the hospital. By the time they got there, his condition was much worse.

The plaintiffs are accusing the school district and its coach of failing to provide water during excessively hot conditions, failing to render aid when one of the students collapsed and is responsible for his condition worsening when he should have been getting help for heatstroke. By then his brain and other organs had been deprived of oxygen.

The lawsuit seeks to recover damages for decreased quality of life and loss of potential earnings. If the boy is as bad as the lawsuit claims, he will likely need 24-hour care for the rest of his life.

In a case like this, damages tend to be high. But when it’s a parent filing a lawsuit against a public school district, the school district is protected by sovereign immunity. That means that the state has the ultimate say in which cases are allowed to move forward, caps damages, and requires certain procedural deadlines be met that wouldn’t be present in a case against any other defendant.

In a typical case against a non-governmental agency, the boy would be entitled to receive damages for medical expenses, lost wages, and reduced quality of life. In the case of a 16-year-old boy recovering lost wages, you would have 50 years’ worth of potential earnings prorated throughout his lifetime. This is in addition to decreased quality of life considerations and the cost of 24-hour medical care.

However, damages against governmental agencies tend to be capped at somewhere between $100,000 and $300,000 depending on the state the claim can be pursued in court. So, it would take an act of the legislature to authorize a figure higher than the sovereign immunity statute allows.

A claims bill is a vehicle by which the judgment gets brought in front of the State Legislature and the lawmakers in Tallahassee (for a Florida claim) have the ability to say whether or not the State will pay in excess of those limits. Claims bills are not readily approved, nor do they happen expeditiously.

If you or someone you love has suffered severe brain damage as a result of another’s negligence, call the Tampa head & spinal injury attorneys at The Matassini Law Firm today to learn more about how we can help.

By The Matassini Law Firm | Posted on January 5, 2021
« Woman Dies After SUV Crashes Into Starbucks
Ten Arrested in Unemployment Fraud »
Skip footer and go back to main navigation