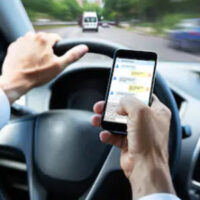 Generally, distracted drivers kill thousands of victims every year. A significant number of these crashes involve cell phones. To reduce the number of fatalities, Florida lawmakers recently approved a much tougher cell phone ban. But the new law only goes so far.

Why are Cell Phones So Dangerous?

Distracted driving comes in many forms. Examples include eating while driving and talking to passengers while driving. But only hand-held cell phones combine all three forms of distraction, which are:

Hands-free gadgets, including GPS navigation devices, might be even worse. Hands-free phones are visually and cognitively distracting. Furthermore, these gadgets have a latent distraction effect. Drivers who use hands-free phones often take almost thirty seconds to re-engage with driving after the stop using a hands-free device.

Cell Phones and Negligence Per Se

Nevertheless, the law has many exclusions. Hand-held GPS navigation devices are specifically excluded. Also, the law does not apply to a number of other smartphone uses, like web surfing, picture taking, or video blogging. Moreover, the law only applies when the vehicle is moving. If the driver is at a stop light, the driver may text away, despite the aforementioned latency effect.

As a result, the negligence per se rule does not come up very often in most device distraction cases. Under this rule, tortfeasors (negligent driver) who violate safety laws and cause crashes may be liable for damages as a matter of law. A few area municipalities have stronger cell phone bans, so the negligence per se shortcut may have some broader applicability in some places.

The bottom line is that if a tortfeasor was using a cell phone, the tortfeasor will probably not get a ticket, even if cell phone use clearly caused the crash. So, Tampa personal injury attorneys must use circumstantial evidence to prove ordinary negligence. Evidence on this point includes:

Frequently, tortfeasors “accidentally” erase such records. It’s usually possible to revive deleted files, but the process is costly and time-consuming.

A spoliation letter might be a better way. This letter creates a legal duty to preserve all possible physical evidence in the case, including the aforementioned cell phone records. Tortfeasors who ignore these letters could face stiff judicial penalties and look like they have something to hide.

In civil court, the burden of proof is only a preponderance of the evidence (more likely than not). Nevertheless, it is more important now than ever to preserve evidence and details of your personal injury claim. Insurance companies have long tainted potential jury pools by injecting fear of raised rates and insurance scams into everyday advertising and friendly media attention.

Distracted drivers often cause serious injuries. For a free consultation with an experienced Tampa car accident attorney, contact the Matassini Law Firm, P.A. We do not charge upfront legal fees in negligence cases.