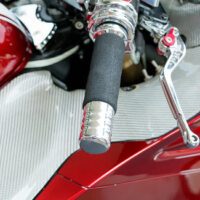 A 72-year-old woman making a left turn against traffic pulled directly into the path of an oncoming motorcycle. The rider was killed almost instantly.

This wreck occurred near the intersection of Highway 301 and Daughtry Road. According to Florida Highway Patrol troopers, 73-year-old Shirley Brooks was trying to turn left against traffic from Highway 301 onto Daughtry. She pulled out directly into the path of 29-year-old David Engberg. The front of his motorcycle slammed into Brooks’ vehicle. She was transported to a nearby hospital with minor injuries and he was declared dead at the scene.

Officials say that charges may be pending against Brooks for causing a fatal accident.

Vehicle safety design and engineering has improved significantly since the 1990s. So, while deadly crashes are still rather common on freeways, they are rare in lower speed collisions on side streets.

But these things are not true with regard to motorcycle riders. In fact, vehicle-on-motorcycle crashes are about twenty-five times more deadly than vehicle-on-vehicle collisions. Motorcyclists have no steel cages or multiple restraint layers to protect them. Since they are almost completely exposed to danger, these victims routinely sustain injuries like:

If the victim initially survives these wounds, and that’s a very big “if,” the medical bills alone may exceed $100,000. Frequently, health insurance companies refuse to pay all of these expenses, for various reasons. An experienced attorney can help with complex billing and insurance issues.

Frequently in these situations, the tortfeasor (negligent driver) tells officers something like “She came out of nowhere” or “I never even saw him.” These lines are supposed to be excuses, but in fact, they are basically admissions of liability.

Drivers have a duty of reasonable care, which includes a responsibility to maintain a proper lookout. That duty is not limited to other cars. Tortfeasors must also keep a sharp eye out for pedestrians, bicyclists, motorcycle riders, and others, especially when they execute dangerous maneuvers like turning left against traffic.

Unless there is evidence that the victim was riding recklessly, such excuses hardly ever hold up in court.

The above story is somewhat rare, in that authorities may file vehicular manslaughter charges against the tortfeasor. Emergency law enforcement responders rarely take this step in these cases, usually because police accident reports only contain one side of the story in fatal accident claims.

Left-turn motorcycle wrecks often cause serious injuries. For a free consultation with an experienced Tampa car accident attorneys, contact The Matassini Law Firm. We do not charge upfront legal fees in injury cases.