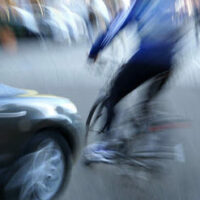 Although the circumstances are still unclear, there is no dispute as to the outcome of a recent vehicle collision that killed a 73-year-old bicyclist.

After a car struck Moses Carter, Jr., the victim spent between fifteen and twenty minutes pinned underneath the vehicle’s tires. Several witnesses interacted with Mr. Moses during this period, as he lay helpless on East Hillsborough Avenue near the 28th Street intersection. The witnesses all said they tried to assist the victim, but there was very little they could do. We “were talking to him for quite some time, and pretty much he died up under the car,” one said.

So far, area first responders have not explained the delay in their arrival.

Although bicycle riders amount to less than 1 percent of the people on the road, about 450,000 of these individuals are seriously injured in vehicle-bicycle collisions every year. The total cost is about $10 billion, when considering lost productivity and medical bills.

The injury rate is probably so high in these incidents because when a 4,000-plus pound car hits a 20-something pound bicycle at a relatively high speed, the forces are simply too great for the body to withstand. Some of the serious injuries include:

What is the Foreseeability Rule in Tampa Negligence Cases?

Car crash injuries in Tampa are not compensable unless they are foreseeable. In other words, if there is no logical connection between the negligence and the injury, there is no recovery. This rule comes from Palsgraf v. Long Island Railroad.

As a woman waited for a train, some careless employees on the other side of the platform caused a man to drop a package of fireworks, Said fireworks exploded, making a shock wave that pushed a pair of large scales on to Ms. Palsgraf. The court ruled that the railroad company was not responsible for her injury, even though its employees were clearly negligent, because her wounds were not a foreseeable consequence of their carelessness.

In the above case, there may be a question as to what caused the victim’s fatal injury. Was it the tortfeasor’s (negligent driver’s) misconduct or the delay in emergency assistance? A jury would have to decide this question after it heard all the evidence.

Bicycle-vehicle crashes nearly always cause serious injuries that are a foreseeable consequence of the tortfeasor’s carelessness. For a free consultation with an experienced personal injury attorney in Tampa, contact The Matassini Law Firm, P.A. Home and hospital visits are available.

By The Matassini Law Firm | Posted on March 27, 2018
« Ten Tips To Follow After A Car Crash
Massage Envy Case Has A Tampa Connection »
Skip footer and go back to main navigation